Breaking News
Another Liberal Pub Openly Supporting Domestic Terrorists
Crypto Wallet Mishap Leads to Multi-Million Dollar Losses
Biden Makes History, But Not the Good Kind
Another Republican Bails on the GOP
Police Arrive at Golf Course… What They Find...
BLM Set to Open 10,000 SQFT of Anti-White...
One letter to the FBI is bad news...
Joe Biden’s pollster gave him a warning that...
Hunter Biden got called out for doing something...
Joe Biden revealed the stunning way Fox News...
Home News The End May Be Near for Mark Zuckerberg, Here is Why
NewsUS News

The End May Be Near for Mark Zuckerberg, Here is Why 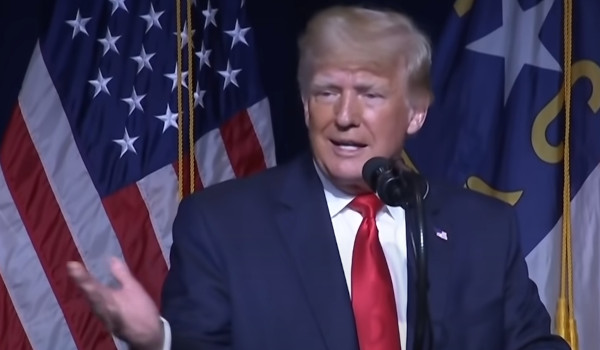 President Donald Trump addressed the North Carolina Republican Party Convention on June 5th, but this wasn’t some ordinary bout of political rallying. No. Two, potentially three YUUUUGE developments arose from his speech. First, we have found definitively that Lara Trump, the President’s Daughter-in-law will not be running for the US Senate, rather President Trump has endorsed Rep. Ted Budd. Second, Mark Zuckerberg could be in some SERIOUS trouble. And finally, President Trump is planning a 2024 run “if he’s healthy” according to Politico.

“This election will go down as the crime of the century,” Trump said. “And our country is being destroyed by people who perhaps have no right to destroy it.

“We will break up the Big Tech monopoly,” he said on Saturday. “We will reject left-wing cancel culture.”

The entire speech is available on CSPAN, interestingly they refer to the speech as a “Campaign 2024” event.

What Did Zuckerberg Do? Oh, We’ve Covered This One.

There are multiple cases that outline Mark Zuckerberg’ s interference in the 2020 Election, first and foremost: through the CTCL or The Center for Tech and Civic Life Zuck pumped a total of $400 million of funding to “provide officials with the staffing, training and equipment necessary to make sure that every voter can participate in a safe and timely way in the election.”

This was hardly a “Non-partisan” operation as the mainstream media and Zuckerberg have contended. Patriot United News reported,

“InfluenceWatch gives us a window into the “strong ties” CTCL has directly to Democratic political operatives. “CTCL’s board of directors have strong ties to Democratic political operations, notably Tammy Patrick, a senior advisor to the elections program at Pierre Omidyar’sDemocracy Fund, and Cristina Sinclaire, who was previously employed by NOI as well as by the progressive data service Catalist.”

And remember how President Trump said that Zuck threw his money into “highly Democrat areas”. Take a look at what Crystal Carter revealed on Twitter:

Zuckerberg and the CTCL threw hundreds of millions of dollars into supporting the use of unattended dropboxes which amount to little more than ballot harvesting and 100% mail-in-voting which was patently unconstitutionally applied in Georgia, Wisconsin, Michigan, and Pennsylvania. The unconstitutional actions have still not been adjudicated since the Supreme Court refused to hear Texas’ case against them.

The Secretaries of State in those four states particularly usurped the constitutional role of the states’ legislatures to make changes to the manner in which their elections were conducted per Article 2 Section I of the US Constitution. Zuckerberg enabled and therefore aided and abetted these Democrats in illegally setting the stage for the takeover of the Biden-Harris regime.