Breaking News
Trump Family Member Betrays Him
Trump Has Had Enough – Tells WHO To...
Meghan & Harry Pander To BLM By Slamming...
Defund The UN: UN Investigation Claims Pres Trump...
McConnell Is Fed Up! Calls Out Democrats (VIDEO)
ICE Has a Rude Awakening for International Students
BLM Leader Exposes Their Motives: “Allah Give Me...
Watch: Rep. Omar Calls To ‘Dismantle’ US Economy,...
McEnany Rips Into Media For Ignoring Child Murders...
Trump Preparing An Order That Will Correct The...
Home News Facebook allows ads from China blaming Trump for Coronavirus
NewsUS News

Chinese state media are flooding Facebook and Facebook-owned Instagram with political ads attacking the Trump administration’s response to the coronavirus while praising China’s handling of the pandemic, according to an exclusive new report by The Daily Telegraph.

The report states that the Chinese-run state media Xinhua, China Central Television (CCT), and the Global Times have targeted millions of online users around the world with undisclosed ads promoting stories in Chinese, English, and Arabic.

“Yet all of them initially ran without a political disclaimer, allowing them to hide information about who they were targeting and sometimes letting them sidestep Facebook’s strict rules on political advertising,” the Telegraph reported.

The ads have reportedly been seen millions of times and downplay the communist regime’s handling of the COVID-19 outbreak, believed to have begun in China’s Hubei province in December 2019.

“[China] has taken stringent and forceful measures, and turned the tide on coronavirus,” one ad said.

“Trump’s disruption to China has severe consequences,” another said.

“Trump administration and its supporters don’t believe the U.S.’s ordeal is the result of erroneous policy. This will impede the U.S. from taking stronger and harsher measures to correct their mistakes,” a Global Times ad reads.

NEWS UNSPUN:  If you’ve stopped trusting the mainstream media … welcome to LaCorte News. Join us to fight back against dishonest news coverage and social media censorship!

Some ads cited Trump’s widely criticized use of the term “Chinese virus” when referring to the coronavirus and implicitly accused the U.S. president of “defamation.” 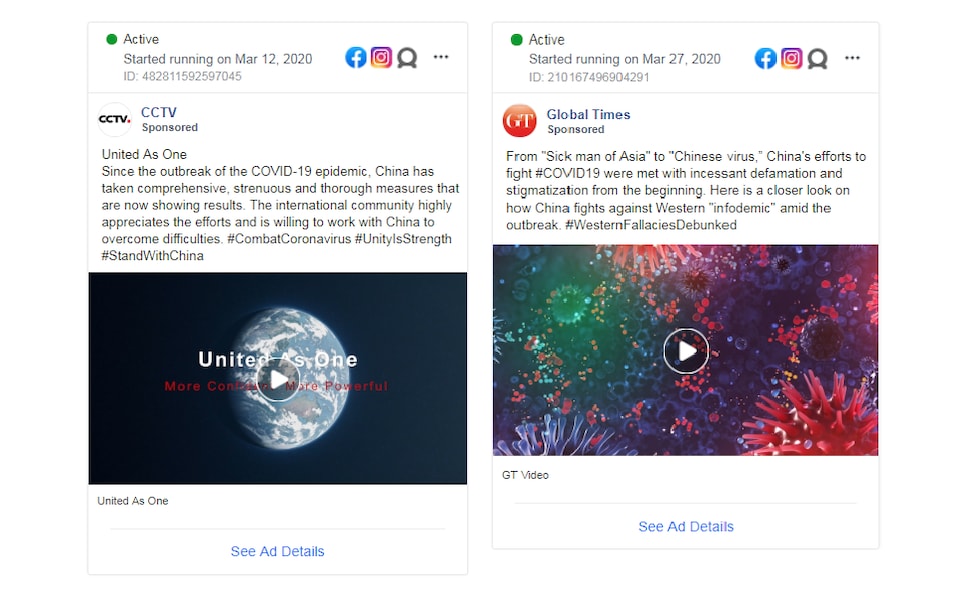 The emergence of the ads comes as many of Facebook’s content moderation employees have been sent home in isolation to avoid catching the disease, according to The Telegraph.

“Moderation is sclerotic because they literally are working with 10pc of their human content moderators right now. They’ve dismantled their entire appeal system and they’re archiving things for appeal later,” said Kate Klonick, a law professor at St John’s University in New York City. She said the company is “just keeping [its] head above water” and allowing disinformation “more opportunity” to spread.

A Facebook spokesperson told the outlet it was an “error” that the ads were not classified as political and said the company has since rectified the issue.

In August of 2019, some of the aforementioned state-owned Chinese news organizations were using Facebook ads to attack the pro-democracy protesters in Hong Kong, the Telegraph reported at the time.

Around that time, Twitter banned ads by state-run news outlets after it came under fire for allowing ads that denied China’s repression of Uyghur Muslims in the Xinjiang region.

The Facebook spokesperson said the company chose to flag, rather than ban, state-owned media to allow more transparency.

We’re a news site for people who don’t trust the news. Check us out daily! You can also find us on Twitter.

Susan Collins Stabs President Trump In The Back, Claims Firing IG Atkinson Was “Not Warranted”